This campaign has ended. 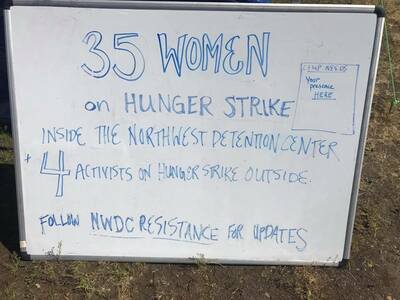 We call on the City of Tacoma to take responsibility for ensuring the public health and safety crisis that the Northwest Detention Center (NWDC) poses. This means acknowledging that:
1) A detention center is not legally a correctional facility. This means that it is not an "essential public facility" as defined by the WA Smart Growth Act.
2) People live in the NWDC. The City of Tacoma should impose regulations to ensure labor, safety and environmental health conditions adequate to a residential facility. This would make NWDC a non-conforming land use, making expansion close to impossible.

The recent hunger strikes by people detained at the NWDC have brought renewed attention to the deplorable conditions at the GEO-owned facility. The detention center affects not only more than 1,505 people who can be held any given day, but also their children, families, and neighbors who form the backbone of our communities.

We will deliver the petition by hand to the the Mayor and City Council at the October 4, 2017 public hearing. Join us!

On February 27, 2018, Tacoma City Council unanimously voted to change the municipal code to ensure that no immigrant detention centers can be built in Heavy Industrial or Port-Maritime Industrial zones - ever again! While this doesn’t mean we can close down the Northwest Detention Center (yet), the NWDC has legally become a non-conforming land use. What this means is that we’ve blocked the NWDC from expanding again! Let’s celebrate this victory – a wrench in the immigration machine – even as we recommit to dismantling ICE and ending immigrant detention in Tacoma, and everywhere else.
Our victory has GEO Group running scared. On March 22, they sued the City of Tacoma to have this ordinance invalidated. We know that when we fight, we win, and we will continue fighting to protect our victory, until we shut down the NWDC. We are grateful to have you in this fight.

The Tacoma Planning Commission has delayed the public hearing on correctional facilities. This is possibly related to the WA State Attorney General's lawsuit over the NWDC's failure to pay detainees minimum wage. The City plans to reschedule for November -- we're doing our best to keep up to date with them, and we'll let you know as soon as the public hearing / comment is open!