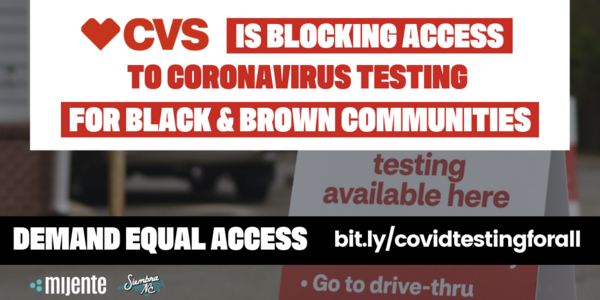 CVS -- one of the nation’s largest retail chain of pharmacies -- is making it impossible for the hardest-hit communities during the COVID-19 pandemic to access their testing operations. The company is not only requiring proof of in-state residence, drivers license or social security number to get COVID-19 testing, but even going so far as refuse service to Spanish-speaking and/or undocumented members of the community at some of its locations in North Carolina. This is unacceptable.

CVS has publicly claimed that their testing sites are focused on the most “underserved and vulnerable communities.” Yet, Black and Brown, undocumented, poor and working-class populations -- who are concentrated in the frontlines of the “essential” workforce -- are facing barriers to receiving COVID-19 testing there.

Millions of Americans do not have a government-issued ID, particularly U.S. born and immigrant Black and Brown communities. In addition to undocumented immigrants who do not have access to drivers licenses in states like North Carolina, over 21 million U.S. citizens do not have government-issued ID. These identifications can be costly and difficult to obtain, representing a significant block for low-income communities. According to a 2006 report, up to 25% of Black people over 18 years old lack government-issued photo ID, compared to only 8% of whites. Requirements to obtain an ID have only become more stringent since then.

CVS has the power to change its policy. According to NC state health officials, reporting on COVID-19 testing “is unrelated to residency or nationality.” That means that the company has taken it upon itself to require residency and an ID from the people it seeks to serve.

We are only as safe as the most vulnerable among us.

Tell Larry Merlo, President and CEO of CVS Health, to remove this discriminatory policy and stop blocking access to COVID-19 testing for Black and Brown communities at all the CVS testing sites.