To: University of Washington Students 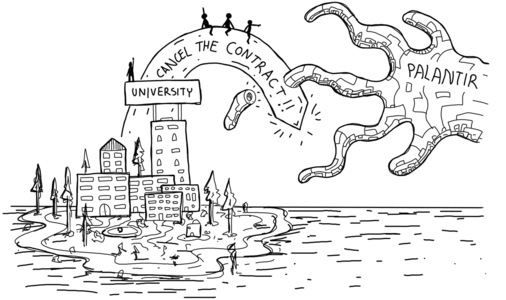 This fall, Palantir has the option to cancel its contracts with Immigration and Customs Enforcement, an agency that has been unleashed under the Trump administration to target, detain, and deport thousands of immigrants across the country.

Its second tool, FALCON, is used by agents leading workplace raids, which increased by 650% during President Trump’s first year in office and arrest thousands of people every year just for being undocumented. During a raid in which ICE agents hit 7-11s nationwide, all agents were told to download Palantir’s FALCON mobile app for use during the raid. FALCON is used by agents who lead raids like those in Mississippi in early August, when almost 700 people were arrested en masse during the first day of school for many, leaving some children without either parent when they came home; at least two children were left alone for eight days because both of their parents were arrested and detained by ICE.

Palantir can cancel both of these contracts. Its ICM contract is up for renewal on September 20, while its FALCON contract is up on November 27. We know Palantir workers, academics, and a wide coalition of ordinary citizens from Latinx and Jewish groups have called for the company to drop its contracts, but executives have ignored these calls, calculating that it’s better business for the company to stay close to the government than to follow ethical considerations.