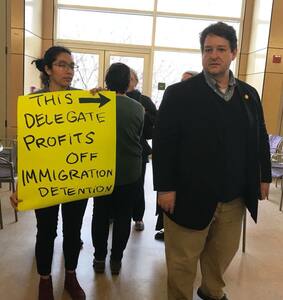 We call on Delegate Alfonso Lopez, one of the few Latinx delegates in Virginia, to:

1. Cut all ties to immigration detention centers and provide public proof that he and the firm through which he works for no longer hold immigration detention companies as clients.
2. Publicly apologize to the migrant community by admitting the extent of his connection with ICA, disclosing the work he’s done for them, and expressing remorse for his wrongdoing.
3. Pay reparations to personally disavow the dirty money received from ICA and the detention of migrants in order to redirect that money into the liberation of these very people.

We – community members, local organizations, groups, and allies of the migrant community in Virginia – are outraged that one of the few Latinx delegates in Virginia, Alfonso Lopez of the 49th District, has been receiving wages from Immigration Centers of America (ICA).

It was revealed that from 2014 to 2016 Delegate Alfonso Lopez received at least $15,000 in wages from Immigration Centers of America. ICA is a toxic private prison company that operates the largest immigration detention camp in Virginia, ICA-Farmville. The majority of people detained in Virginia or Washington, D.C. are incarcerated at ICA-Farmville. We, as members of the migrant community, have experienced heartbreak and trauma at the doors of this detention camp.

Alfonso Lopez’s attempts to justify his wages from ICA are disingenuous and hypocritical for a “champion” of migrants. Numerous people have died in ICE custody, including Anibal Ramirez of Woodbridge, who under custody at ICA-Farmville died due to medical neglect. During the Obama administration and the time Alfonso Lopez consulted for ICA, the largest number of people detained and deported rose and ICA-Farmville increased its average daily population of detention by almost 200 people. The detention and deportation machine that Alfonso Lopez has helped build has now been handed to an outright racist administration. The current administration has endangered programs like Deferred Action for Childhood Arrivals (DACA) and Temporary Protected Status (TPS), putting thousands more migrant lives at risk of detention.

It is clear that ICA and any detention camp is a direct threat to the migrant community.

Alfonso Lopez cannot be a “champion” for the migrant community while at the same time profiting from its incarceration.

We – community members, local organizations, groups, and allies of the migrant community in Virginia – demand accountability from Delegate Alfonso Lopez. We will not stand for this abuse of our community because we believe that an attack against one of us is an attack against us all.