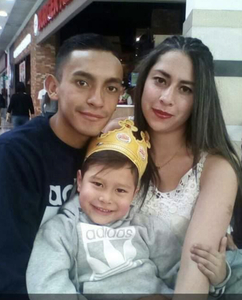 Update 8/26: We received word from Edwin's wife that Edwin is currently at a staging facility in Alexandria, LA. The clock is ticking to prevent his deportation! ICE can prevent the trauma Edwin's wife and son will go through by his deportation. He cannot safely return to his home country, where he experienced racially motivated threats and attacks. Edwin will be turning 30 years old very soon, and he should spend that birthday with his family. He enjoys chocolate, blackberry smoothies, likes to draw, and is a loving father. Please urgently sign and share this petition to reunite Edwin after being separated from his family for over 2 months.

---
Edwin is a beloved husband, father, and friend of Morris County, NJ, and we are requesting his release from immigration detention in Louisiana. Edwin has been separated from his wife and young son (8) for over two months. This young family came to the United States after Edwin experienced violent and racially motivated threats and attacks. Edwin's wife and his adopted son were also threatened, which led them to make the difficult decision to leave Colombia. They arrived in the United States but were separated as Edwin remains in immigration detention. We ask that he be released to his wife and young son, who have experienced immense trauma and grief from the separation.

Edwin could be deported as soon as Monday, your support is urgently needed to keep him home with his family.