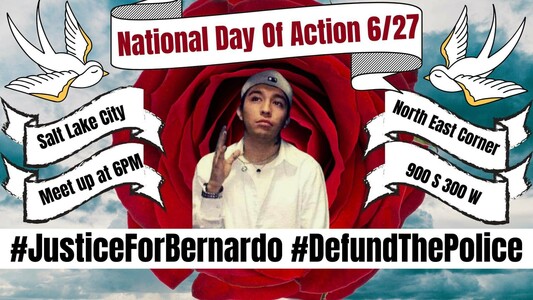 We DEMAND the release of the full, unedited, high quality (1080) video from all four of the body cams of the officers involved in the killing of Bernardo Palacios Carbajal.

We DEMAND the release of the full, unedited, high quality video from the three security cameras at the storage facility where Bernardo was killed, as well as the cameras from the traffic intersections and the restaurant alley.

We DEMAND the names and badge numbers of all the officers involved in the execution of Bernardo, as well as the backgrounds and misconduct records of these police officers.

We DEMAND the release of the autopsy, including information on the desecration of Bernardo's body wherein all of his fingers were hanging off his body from what appeared to be gunshots.

We DEMAND all officers involved to be fired, arrested, charged, and convicted with murder and desecration of the body of our brother Bernardo Palacios Carbajal.

We DEMAND you reopen all SLCPD cases involving police killings, particularly of individuals shot in the back.

We DEMAND you immediately defund the SLCPD and increase funding to communities disproportionately targeted and assaulted by your police force.

Bernardo Palacios Carbajal, 22, was shot in the back over 30 times while he was fleeing from police officers moments after yelling his last words “Officer, I don’t want to die!”  Seconds later officers proceeded to shoot him after he was dying on the ground. Instead of offering medical assistance after shooting him, officers yelled for him to “Show us your fucking hands!” Then his body was desecrated by having all his fingers shot causing some of them to become partially disconnected from his hands.

We DEMAND justice for Bernardo.

The lack of meaningful action from the District Attorney's Office and Salt Lake City's Mayor, reveals an implicit backing of SLCPD's killer cops.

Personal Delivery of Petition to Sim Gil and Erin Mendenhall