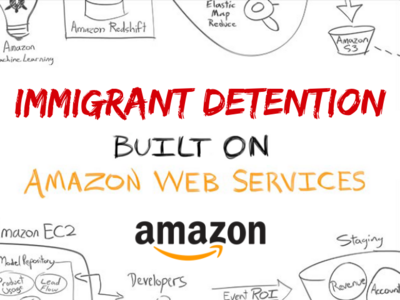 Amazon: Drop your contracts with the Department of Homeland Security, and stop enabling ICE's detention and deportation machine!

New research shows that Amazon is helping ICE track, detain, and deport immigrants -- in a big way. We've known that Amazon's servers host Palantir, the company that provides ICE with “mission-critical services,” such as its case management software, and we've been pressuring Amazon to drop Palantir. But it turns out Amazon's role in the deportation machine goes deeper than that.

These systems are new, and dangerous in new ways. They are accumulating unprecedented amounts of data (everything from facial scans to social media content), and exchanging information among city, state, and regional law enforcement systems, as well as some foreign governments, for the purpose of finding, deporting, and detaining immigrants. DHS and many other law enforcement agencies are spending billions of taxpayer dollars on these tech systems -- and Amazon, Palantir and other tech companies are pushing them to go further.

It's time to hold Amazon accountable for its outsized share in building the deportation machine, and demand that they stop. It won't be easy -- Amazon makes billions from these contracts. But the company also depends on consumers -- including millions of Latinx people -- and has to worry about protecting its brand. Recently, the company was forced to raise its minimum wage to $15/hour, which wouldn't have happened without a major campaign demanding it.

We can force Amazon to stop helping DHS and ICE target immigrants, if enough of us call them out, stay engaged, and keep the pressure on.

Thank you for your support! Together with partner organizations, Mijente members and allies delivered petitions of over 200,000 signatures demanding that Amazon cut ties to ICE on "Prime Day" 2019!

Check out the actions: https://twitter.com/hashtag/AmazonVSImmigrants?src=hash