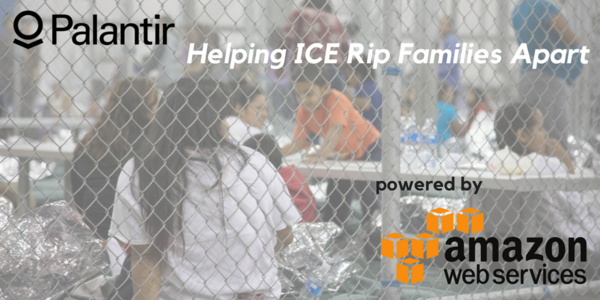 Amazon is paid millions of dollars to provide services to Palantir, the software company that allows ICE to track down immigrants across the country. Amazon must drop Palantir from its servers.

Palantir has a $53 million contract
with ICE to provide “mission critical” services for the agency that help it surveil, track, and deport tens of thousands of immigrants nationwide. Its software is used as ICE’s primary data storage and analysis system and helps the agency build profiles of immigrants
based off their “schooling, family relationships, employment information, phone records, immigration history” and much more, according to The Intercept.

Without Palantir, ICE would be crippled in its attempts to find and deport every undocumented immigrant within our borders.

Amazon hosts Palantir on its web servers. It is paid millions of dollars to provide Palantir the infrastructure needed to run its services, and by doing so is implicated in the human rights abuses perpetrated by ICE using Palantir’s software. Hundreds of Amazon employees have already signed a letter
asking the company to drop its contract with Palantir.

Without Amazon, Palantir would be unable to help ICE.

The abuses of Immigration and Customs Enforcement (ICE) are well-known. ICE has separated thousands of children from their parents at the border, detaining them in freeze boxes and dog kennels for weeks. President Trump’s new policies allow the agency to target and deport any and all undocumented immigrants within the country, even going after people who have already obtained their citizenship by “denaturalizing” them.

None of this would be possible without Silicon Valley. ICE’s actions are enabled by tech companies like Palantir and Amazon, which make millions of dollars from contracts that support the agency’s deportation machine.

Both Palantir and Amazon have ethical duties not to aid and abet the wide-scale human rights abuses being perpetrated by Immigration and Customs Enforcement (ICE). We must tell both companies to put immigrants before profits and stop supporting ICE and President Trump’s immigration crackdown.