To: Arlington County Board Members

Tell Arlington Board: No Amazon in VA! 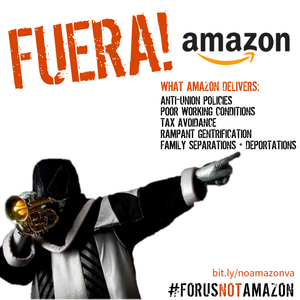 Sign the petition to demand that the Arlington County Board reject any bid or proposal that would give any taxpayer-funded subsidies or tax incentives, such as tax breaks, credits, or abatements, to Amazon's HQ2, whether they are being provided by the county or the state.

Arlington County, Virginia is set to vote on the HQ2 bid on March 16th.

Amazon HQ2 is bad news for the people of Arlington and Virginia.
-HQ2 will add to increased living costs and displacement for our families
-Amazon supports Trump’s anti-immigrant agenda, selling technology to ICE that enables family separation and deportations
-A taxpayer-funded giveaway to the richest billionaire on the planet is theft of public money that should go to schools, housing, healthcare and benefits #ForUsNotAmazon

New Yorkers already recognized the true impacts that Amazon HQ2 would have on them, and they organized and won. If enough of us come together to oppose this, we can run Amazon out of our town too. #NoAmazonInVA #ForUsNotAmazon