Issue a Moratorium on Deportations and Enforcement and Investigate DHS on Day One! 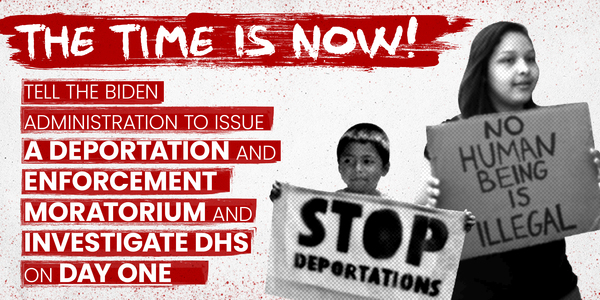 We are demanding President-elect Biden issue the following on day one of his presidency:

•A blanket moratorium on all immigration enforcement actions--including but not limited to deportations, removals, apprehensions, and arrests
•Executive orders mandating the immediate release of all persons held in ICE and CBP detention camps
•An executive directive initiating an immediate, thorough, and wide-ranging investigation into DHS. The investigation must include input from directly impacted people--including people caged by DHS and their families--and the investigating panel must hold listening sessions in all 24 cities that hold ICE Field Offices to ensure community input.

Since its creation in 2002, the Department of Homeland Security (DHS) has systematically violated the rights and assaulted the dignity of immigrants, refugees, and asylum seekers.

Under both Democratic and Republican administrations, DHS has separated families, caged children, overseen the performance of forced hysterectomies, ignored grave allegations of sexual abuse, terrorized our commuities through raids, arrests, and more. Dozens of immigrants have died while in DHS detention camps due to medical neglect. It is clear the policies and practices of DHS pose life-or-death risks to immigrants, refugees, and asylum seekers.

Despite this rotten and repeated history of alarming abuse and naked white supremacy, DHS has never been the subject of an official and far-reaching investigation, and the Department has repeatedly rejected calls for transparency and stonewalled demands for accountability.

While President-elect Joe Biden has promised to reverse the heinous policies instituted under Donald Trump and has repeatedly agreed to a 100-day moratorium on deportations, we know this is not enough.

Add your name to this petition calling on the Biden administration to issue a deportation and enforcement moratorium, and investigate DHS on day one.

Latinx voters, Black voters, immigrant communities, and communities of color helped deliver this election to Joe Biden. It is now time for Joe Biden to deliver for us.